Dancing with the Devil

Posted on December 7, 2019 by knotmagick

The Horned God came a calling, bringing madness to the household over a drink of Whisky on a storm ridden night… or so Saint Nick told those stood in the Market Square in Whitby Old Town this evening during the fifth annual Krampus Parade.

Krampus has been rising in popularity in the last 10 years. Representing the darker side of the holiday, he is the yin to Father Christmas’ yang and brings a deeper pagan meaning to some of the light and sparkle that we are used to. Germanic in origin, Krampus (plural Krampusses) is the one who brings punishment to those naughty little girls and boys. Punishments vary from being bundled into a bag and beaten with birch switches to being locked up in a cage and hug from a tree but it is always those children who misbehaved so badly that St Nicholas simply can’t include them on the “Nice” list. 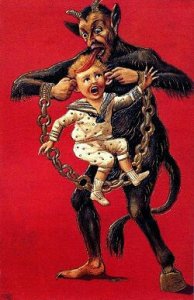 Saint Nicholas has his saint day on the 6th December so of Krampus visits all the little girls and boy during the night before to meet out his punishment before the presence of the Saint drives him back into Hell. Krampus is both described as a devil who stands in contrast to the Saint or equally a fallen horned god ( the oft repeated line is that he is a son of the Norse goddess Hel) who was Christianised to keep his holiday acceptable to Catholic Christianity.

I’m not sure why there has been a return to popularity for Krampus in recent years but maybe the rise of the Elf on a Shelf opened a door for him. Let’s be honest, if you can bring that ugly little elf into your home and tell the kids he’s snitching on them to Santa then the jump to a switch welding demon isn’t all that great.

I’ve not been able to get to previous Runs but if this was anything to go by then I’ve been missing out. Mulled wine, deep drumbeats and the deeper terror that a demon capering along the street really bring out the Pagan in me.

Weaving Magick and Crochet in the madhouse I call home. I am a devotee of Hekate and a follower of Pan.
View all posts by knotmagick →
This entry was posted in Magick, Musings and tagged Krampus, Parade, Whitby. Bookmark the permalink.

The Witch of Lupine Hollow
HELLENISMO

The true roots of Europe

The Wælcyrie of Carr Naze

Myth, Magic and the Mundane...

applications open for a new tagline

AKA Erin's Blog: All are welcome, sanity is optional

A Place Where Learning and Magick Meet

Fighting to be a better Pagan, one day at a time

a collection of hobbies and interests, those being mountaineering, general outdoors, bushcraft and leathercraft, an amateur at all of them, but, great fun all the same

Bringing Autistic jobseekers and employers together